An electrostatic precipitator is air pollution control device used to separate solid particulate matter from a contaminated air stream. Contaminated air flows into an ESP chamber and is ionized by electron emitting electrodes; also known as the corona chamber. The suspended particles are charged by the electron field and migrate to a collection plate. Accumulate particulate matter is removed from the collection plates at periodic intervals by rapping or hitting the plates with rappers (mallets type hammers). Heavy particles fall to the base of the ESP where hoppers hold the removed particles for disposal.

Electrostatic precipitators are used to separate small particles, 1 micron or smaller, from gas streams. This process is also used in desalters to separate salts and sediment from crude oil feeds.

Electrostatic precipitators, such as the one shown here, work by exposing particles in the feed stream to an electrostatic field. The particles are small and easily collect a charge. The charged particles are then collected and removed by collectors that are oppositely charged.

The collectors get covered with particles and are cleaned off periodically. The particles are generally discarded but can be further processed if profitable.

Electrostatic precipitators can collect a variety of particles from a gas stream. The table below shows the wide range of collection sizes in gas streams, from as small as x-rays and smog to as large as fly ash and pulverized coal.

The following is a small list of typical industrial applications for ESPs.

SO2, SO3, acid mist and ammonia control (wet ESPs) 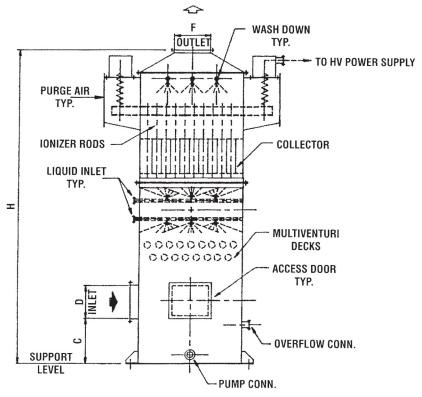